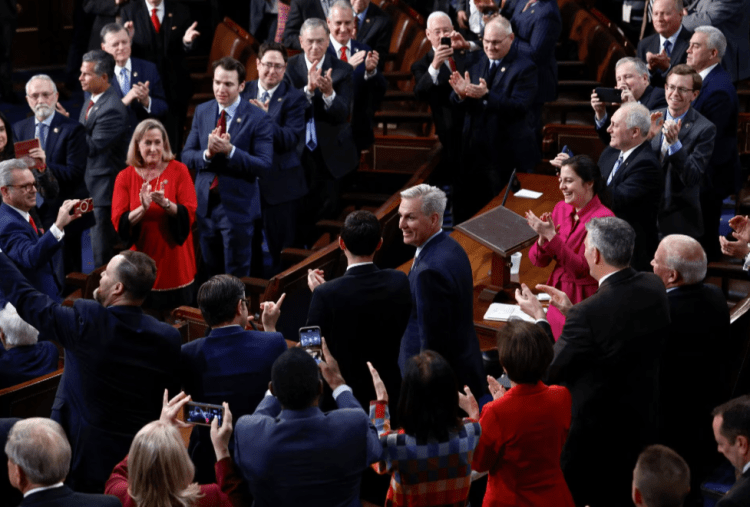 California Representative Kevin McCarthy was elected Speaker of the House on January 7th. The election took 15 rounds over four days of voting, the longest period of time in American history since 1860 that the House has gone without a Speaker.

Traditionally, the majority party nominates one person and elects them during the first roll call vote, ensuring the majority needed for the nominee to be selected Speaker. However, about 20 far-right Republicans refused to vote for McCarthy, making the selection process drag out over days until McCarthy finally received 216 votes, the technical majority needed after a couple of representatives voted present.

Following the November elections, the Republican conference and Democratic caucus hold informal votes to deduce which person they would like to officially nominate to lead their party. Democratic representatives chose Rep. Hakeem Jeffries of New York to be nominated for House minority leader. The GOP choose Rep. Kevin McCarthy to be nominated for Speaker of the House, who is also the House majority leader.

Roll call voting is used to vote for the Speaker of the House. Each individual member of the chamber stands up individually to publicly cast their vote, along with anything else they have to say. This slow, theatrical voting process can be a double edged sword. For the Democrats, there was a demonstration of unity. For all 15 rounds of voting, Rep. Hakeem Jeffries received all 212 Democratic votes for House minority leader. In comparison, the roll call was a threat to McCarthy’s stability and authority within the Republican party.

In most Speaker of the House elections, the roll call vote is more tradition than election. Most times representatives vote for their party’s official speaker nomination and the election does not take more than one round. In reality, representatives can vote for whomever they want. During the 7th and 8th rounds of voting, Rep. Matt Gaetz of Florida cast his vote for Donald Trump in an apparent stunt to oppose McCarthy’s leadership. In most other rounds, other Republican House Representatives, such as Arizona Rep. Andy Biggs and Ohio Rep. Jim Jordan, had votes put towards them instead.

During the first round, McCarthy only received 203 votes. The magic number needed in the House election is 218 votes out of the 435 members. Out of the 20 Republicans that withheld McCarthy the position, ¾ would need to change their vote to support McCarthy or choose to vote present. Voting present means that someone’s vote will not be counted towards anyone in particular, which lowers the threshold for the majority since less votes are being counted in total.

The 20 Republican representatives that voted against McCarthy have similar beliefs and backgrounds. 19 of them are associated with the Freedom Caucus, largely considered the most conservative and far-right caucus within the Republican conference. This group favors social and fiscal conservatism, opposes immigration reform, and has largely sought to appeal the Affordable Care Act. They all voted for Jim Jordan of Ohio during the 3rd round of elections, who serves as the first Chairman of the Freedom Caucus. This group also has strong ties to former President Donald Trump and most have denied or doubted the 2020 election.

McCarthy compromised on several issues in order to secure enough of this group’s votes.

One such compromise was reinstalling a smaller threshold to commence a vote for the Speaker’s expulsion. Under former Speaker of the House Rep. Nancy Pelosi, the House Speaker could only vacate the chair if a party leader or majority of one party chose to initiate the vote. Before her, all was needed was one person to fill the requirements needed to hold a vote. This was to keep the Speaker of the House in check from using their position for personal interests instead of the interest of the whole.

However, this vote puts the House Speaker in a precarious position. If a singular person disagreed with the decisions of the Speaker, they could start a vote to fire them. While this action has not been taken since 1910, there have been multiple intentions to use it. As tensions between political parties and interests have risen,  this threat of a vote seems increasingly likely and puts the speaker on a tight lease. McCarthy compromised with the Freedom Caucus members to agree to a 5-person requirement to start a vacate vote. However, with 6 members of the 20 defectors voting present even in the 15th round, it’s clear there are more than 5 people that still wouldn’t not put their name behind McCarthy’s position.

One of the Freedom Caucus’ goals is to limit the national government’s size and power. This includes limiting the number of bills passed, lessen the federal spending budget, and prevent taxes from rising. McCarthy compromised by agreeing to support their House bills. These include a rule requiring 60% of the House support for tax increases, and a rule requiring the federal budget limit to be voted on by the House instead of being automatically increased to fit Congress needs, resulting in deficit spending. Another demand was to appoint 3 members of the Freedom Caucus to the Rules committee, one of the most influential communities in the chamber. They make decisions on how bills advance in congress, how debates are conducted, and can make any amendments they want after the other committee votes on them.

The situation reflects on the fragility the position the Speaker of the House is in. A Speaker needs to be elected before the 435 members of the chamber can be sworn in. The representatives need to be sworn to office before the revenue budgets can be calculated, approved, and distributed. Without the budget, federal agencies cannot function and the government could shut down. This slippery slope makes electing a Speaker quickly a priority. 15 election rounds is time costly and risky.

McCarthy had the votes of all Republicans except for one faction that he needed to get the majority. Because they held out until most of their demands were met, they now have a lot more power in the House of Representatives than before. This underhanded way to guide House politics unveils a design flaw within the Roll Call system, where their opinions are known and the amount of elections are unlimited. Although it doesn’t completely compromise the power of the Speaker, it does limit the Speaker and the chamber’s ability to govern efficiently and justly.