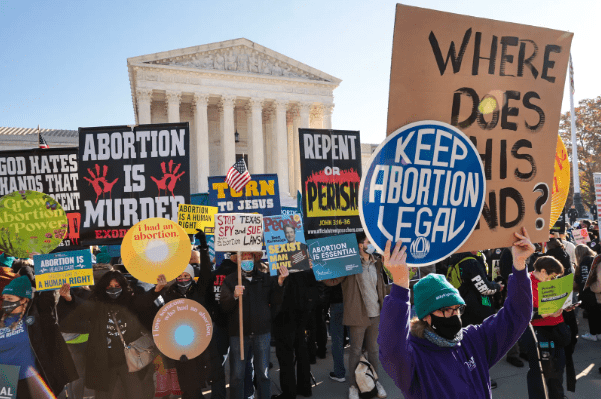 On January 22nd, 1973, the Supreme Court case Roe v. Wade established the legalization of abortions in the United States. However, the overturning of Roe v. Wade on June 24th, 2022, by the ruling of Dobbs v. Jackson is affecting today’s generation and possibly those to come.

This November, voters meet pressure to decide the fate of America. This feeling was expressed by President Biden stating, “this fall, Roe is on the ballot.” This sentiment was reiterated while virtually meeting with Democratic governors to discuss abortion rights only a week after the overturning of the 1973 case. If more Republicans be voted into Congress, abortion will potentially be banned nationwide.

Since the overturning of Roe v. Wade, women seeking abortions across America in states like Texas have been faced with difficulty. Women in Houston would have to travel 600 miles to the nearest abortion clinic located in New Mexico, a common occurance given the newer court ruling. Such ventures are not financially possible for low-income women in the United States. This is also an issue in states such as Idaho, South Dakota, Texas, Oklahoma, Missouri, Louisiana, Mississippi, Alabama, Tennessee, Kentucky, and Arkansas. Louisiana is completely landlocked by states in which abortion is illegal. It takes approximately 12 hours to drive from Louisiana to Florida or Kansas, states where abortion is, for now, legal. Even so, both Florida and Kansas have history of abortion bans.

Negative impacts of the abortion bans can be seen first-hand in Louisiana. This summer, Louisiana resident Nancy Davis made headlines when she was forced to carry her ten-week-old child despite a fatal condition. An ultrasound delivered the news of a devastating skull condition called arcania, which is fatal for infants mere hours after birth. Davis found it necessary to have an abortion. However, with Louisiana’s newfound restrictions on abortion, this option was not available as arcania was not listed under Louisiana’s abortion exemption list. State Senator Katina Jackson, who advocated for Lousiana’s abortion ban, stated the hospital should have permitted it, though this abortion this was still not  legal in the state. Davis would eventually be forced travel to New York for her abortion. This does not remove the emotional and mental toll the whole ordeal would bring to Davis, who stated to WAFB News, “It’s hard to know that… I’m carrying it to bury it.”

Austin Landis of Spectrum News paints a horrific picture where South Carolina Republican Representative Neal Collins expresses remorse towards an anti-abortion bill for which he advocated. In a viral video published to Twitter, Collins describes a situation that took place in Anderson, South Carolina. Only two weeks after the passing of the fetal heartbeat bill, a bill which prohibits abortion once a heartbeat is detected, a 19-year-old was denied an abortion of an unviable fetus. The would-be mother was discharged, but her water had broken leaving a premature, beating heart in the unviable fetus. Attorneys present in the hospital told doctors that due to the heartbeat the fetus could not be extracted.  The hospital could not admit the mother until the heartbeat stopped, so she was discharged and ordered to wait until the fetus passed through her body. The 19-year-old had to wait knowing there was a 50% chance of the loss of her uterus and a 10% chance of her own death from sepsis.

Mark Joseph Stern, who published the original viral video to Twitter, reads, “So long as health care providers risk prosecution and incarceration every time they terminate a pregnancy, these horror stories will just keep coming.”