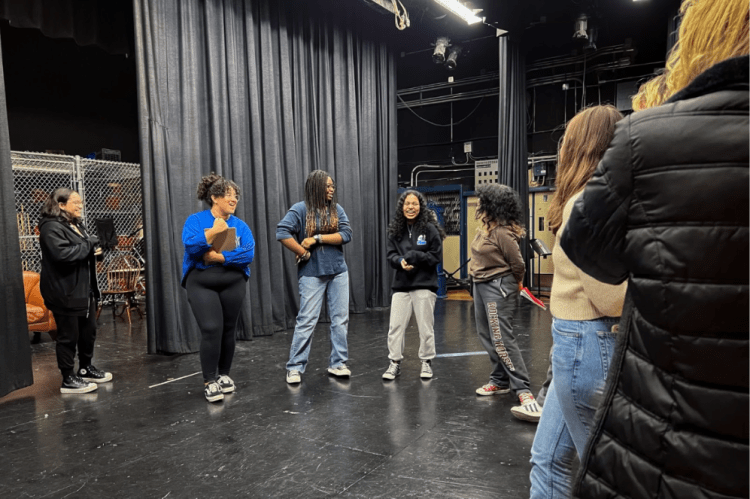 Save the dates! On November 17th, 18th, and 19th, the Port Chester High School Drama Club will proudly present their upcoming performance of Clue.

The play Clue is an adaptation of an earlier movie Clue, which is an adaptation of an even earlier board game called Clue (the UK version called Cluedo) that came to American stores in 1949. This year, the Drama Club is taking a stab at this classic murder mystery tale under the direction of Christina Baurle, Drama Club Supervisor and Clue director.

Behind every production lies the blood, sweat, tears, and efforts of everyone involved. Demetrius Haddock who plays Mr. Walsworth in Clue, the charming yet sarcastic butler. He observes “how hard memorizing lines is and seeing how it fits together,” to be his greatest challenge, “Everyone knows their own lines but not each other’s.”

Sophia Tellez, a stage manager, recognized a crew challenge: “I think the lack of crew. It’s definitely something that’s been really hard because we need a lot of people to help out…right now there are only four people. It’s a struggle but we’re gonna find a way to make it work.” No performing art comes together without a couple of setbacks, but if there is anything a bunch of drama kids have, it is determination, reliability, and positivity.

The characteristics of Drama Club students can be seen in the positive light in which they see each other. Gwen Dominguez, Mr. Boddy, the comical, evil, surprising master of the mansion, acknowledges the cast’s ability: “Everyone is so talented. Everyone is so natural about how they’re acting and it surprises me every day.”

Ashly Olmeda, a senior stage manager, was surprised at how well the production is turning out. “It’s so funny and good. And the work that we [cast and crew] have put into it, we really made the play into our own.”

Making a set of 1950s characters come to life 70 years later requires creativity and joviality. Gwen, for example, put her own twist onto Mr. Boddy by adding a New York Italian-American mobster accent: “I’ve always wanted to do an accent in a show, and putting it in is so much fun.” Even when she messes up, she just laughs even more at the lines.

The cast is also bringing the characters to life through the use of props. “It’s a very prop orientated show. It’s cool. It feels like the ‘50s,” shares Demetrius. From a smoke pipe, to top hats, to a set of jangly skeleton keys, there are plenty of eye-catching props to set both the cast and the audience into the scene.

Their secret to making the assemblance of lines, staging, acting, props, sounds, and lights work? Community. “I think it’s just the community that’s here,” Sophia Tellez said, “There are so many people here that you can trust and tell everything [to], and you spend so much time with them.” An inclusive and encouraging atmosphere is crucial to making an entire production come together.

On a normal day of practice, Drama Club rehearsals last from 3:00pm to 5:30pm. During Tech Week, the week leading up to the first performance, (nicknamed Hell Week in the theater community), practice can last from 3pm to 9pm at night. This is all without accounting for the amount of time the students need to spend doing homework, sleep, and other life commitments. With that many hours spent with the same people working towards a common goal, a community is bound to blossom – but the people that make up the community determine the strength of that bond, influencing the strength of the performance. It is safe to say that the community created within the walls of the PCHS auditorium is one of the highest class.