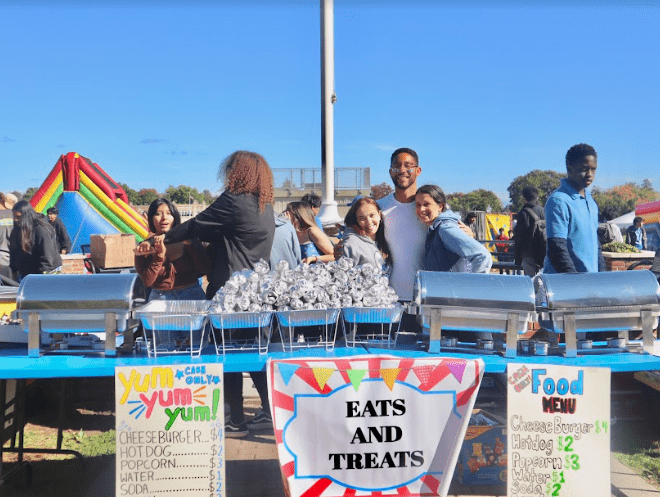 Port Chester High School’s annual carnival took place on Friday, October 14th and was a major success. This is the fourth year the PCHS carnival has taken place, and this year was probably the best one yet. With good food, fun games, and the likes of Mr. Laconi and Mr. Thomas in the dunk tank, there’s no doubt everyone had a good time.

One cannot talk about a PCHS carnival without mentioning the dunk tank. The teachers on the hot seat heckled the students while they tried to dunk them. Nobody can ignore Laconi’s excellent skills of making students angry enough to hit the target, or the fancy costume he had on. Unfortunately, dunking is a very dangerous sport as Mr. Thomas soon discovered. The seat failed to lock, flipping up to hit him in the face, and requiring stitches. But the show must go on, and go on it did.

The carnival had a variety of different games for students to play, a DJ to pump out some good music and, of course, food. This time, however, it was pre-cooked so a faulty fuel tank couldn’t ruin the food they took out.

Mr. Kravitz and Mr. Stabile hosted the carnival in order to bring the school’s community together. According to Kravitz, they want to create a “school environment that people want to hang out at, people don’t want to leave.” In that sense, the carnival was a huge success. People wanted to hang out and everyone enjoyed it. Nataly Garcia, a junior, said that it was a really cool experience, giving her the opportunity to catch up with friends.

Kravitz and Stabile’s vision has also been recognized by the students. Senior Gwen Dominguez said she “loved seeing everyone come out and come together.” Stabile stated that the main reason why Kravitz and himself created Ram Nation is “community togetherness and building school culture,” and what better way to bring people together than fun, games, and food? All the games were also homemade, showing off the creativity of the school’s community. They want to have kids proud to wear PCHS gear and take pride in being a Port Chester student.

Unlike last year, where middle school was included in the fun, the carnival was more of a high school event with a small number of families. Considering last year was directly out of the pandemic, they believed, with good reasons, that the community desperately needed it.  This year however, there were definitely more kids. More kids were enjoying themselves too.

Though the carnival was a huge success, Kravitz and Stabile are always looking to improve for next year. Kravitz touched on making the games even better while Stabile recognized a need for better advertising. Students still had fun, coming up to thank both teachers for hosting the carnival, saying it was much more exciting than last year. Stabile even added that they text about the next carnival throughout the whole year, brainstorming more interesting ideas and activities. With that in mind, one can imagine what’s to come.