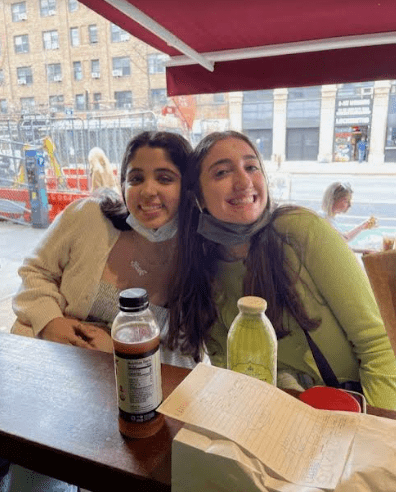 Hello class of 2023! It’s that time of year again. We have finally gotten the opportunity to learn who our next senior class officers will be. These officers, who will voice our ideas and make this year all the more memorable, have given Port Light reporters the opportunity for an interview. This article will feature presidential and vice presidential officers.

Co-presidents Gwen Dominguez and Nexayda Marin were kind enough to sit down with us:

SK: How did it feel when you won? What was your reaction?

GD: We felt both shocked and excited. It was extremely thrilling, especially because all our friends won what they wanted. The moment we’d found out we’d been elected, we were at badminton.  We stopped doing what we were doing and began screaming in excitement at the news of our win.

YS: Now that you’ve earned your role, what do you plan to improve within our school?

NM: Our plan is to raise money for prom tickets so that they aren’t as expensive as what previous years have been. We want the fundraising process to be fun and inclusive for everyone. We’d also like to have more bake sales and give students something to look forward to such as pizza Fridays.

SK: What message would you like to tell to the student body?

GD: We want to make this year a collaborative year and have everyone involved in the decisions we make. We want everyone’s concerns and ideas to be heard.

YS: How do you plan to fundraise for prom and the senior class in general?

NM: I’ve already mentioned a couple, but we intend to fundraise through bake sales,  pizza Fridays, food and blanket sales, new merch, movie nights, and maybe even a cultural night.

YS: Why were you interested in running for president?

GD: We want to make a difference in the school and make senior year memorable. I, for one, am not very competitive and I don’t like conflict, but I couldn’t let that stop me.

NM: We were hoping to get things done and we wanted to be there for everyone in order to make senior year interesting.

After speaking with the co-presidents, we sat down with co-vice presidents Demetrius Haddock and Rochely Carvajal.

SK: How did it feel when you won? What was your reaction?

RC: We were shocked but appreciative that people had chosen us to be senior class representatives.

YS: How do you plan to be the supporting role to the presidents in improving our school?

DH: We’ll support them with every decision they make and will give them the feedback they need.

What responsibilities do you have that differ from the presidents? What are you going to be in charge of?

DH: We are in charge of making events, creating new ideas and figuring out the cost of all of these planned events.

Why were you interested in running for vice president?

RC: It was impulsive, but a good decision. We saw it as an opportunity for leadership and for us to help our high school grow.

What message do you have for the student body?

DH: Muah! Thank you for giving us the opportunity to represent you and make our senior year the best senior year it can be!

We hope that through this interview, it will be easier for everyone to understand the senior class officers’ intentions and help them succeed. They have been delightful to speak with, and they show amazing leadership.