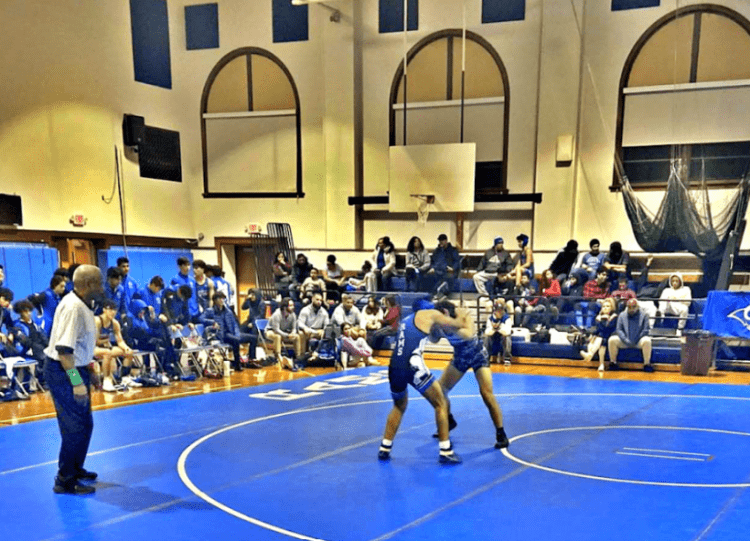 It was the 17th of December, 2022. With Christmas peeking around the corner, the Tony Carlucci Wrestling Tournament was all set to shine in the new gym of the school. Pleasantville, under the leadership of Bernarducci, has become a force to be reckoned with, as he recently became the coach with the most wins (430). The Pleasantville team had won and now had the upper hand.

This time, on January 12, 2023, things were different with the home setting. This event allowed the home crowd to better understand the sport and sufficed as a reason to show up in greater numbers for future events.

The setup in the old gym was nothing short of a spectacle. The pumped-up rock music in the air and chants echoing in every ear; created an aura of reckless spirit and enthusiasm. The veterans of the school who graduated also showed up to cheer the home team, but the support for the Pleasantville side was nothing to miss out on. Huge vows went into the air with every takedown and a strong grapple would get the audience in a state of utter shock as their eyes would glaze for what was to appear next.

The event started off with a win by Eric Coyt. His win had won him a big gold medal that he wore for the rest of the event. This was followed up by a match of sheer intelligence  that kept the crowd on the edge of their seats. It is fair to say that this match was the one that made the audience’s time worth every minute they spent there. Shouts from both ends erupted as Eduar Polanco and his opponent tried their best to wrestle each other out. Coach Facc’s good bit of advice to Eduar worked for him as during the closing moments: Eduar let loose of himself from a tight position and rolled over his opponent to get the crucial win for the home team.

This was followed up by a win from Julian Estevevez by a pin, another win from Nicholas Pereira, by forfeit, and David Hyland, by a pin. A good gesture from the home crowd was on display as Hyland wrestled against a female wrestler. Good support was shown in her favor too (girl power) and the match ended with Hyland getting an easy 6-0 win. The atmosphere during the event was amazing and it seemed like neither side lacked any winning spirit. The PC Wrestling Team cheered and enjoyed every moment as at one point, one of the guys shouted “Oh, he’s hungry,” and that got the crowd rallied up as well.

Jonathan Tenesaca’s win by pin added a further lead for the home side. Ricardo Lopez got an additional win for Port Chester by forfeit and was massively cheered and applauded by his teammates and the crowd. The event closed off as Jaden Barbour won his match by forfeit whilst Edgar Escobar got his say via a pin. The Rams got a win by a massive margin. The final score on the scoreboard yelled out dominance and love for the sport, as the Rams got the win by 48 to 19; not forgetting that this was their first home match. As coach Facc recalled at the moment, “I feel pretty good. We lost to them a few weeks ago at our Carlucci tournament, we were down a few starters, so we should’ve won, we feel. We lost by like two matches, so today was good, because we came out ready to wrestle and we didn’t just win, we won in a pretty dominant way.”

The night was closed off with a memorable picture being taken of the spectacle it was. Support was shown for Eric as he claimed, “Like a great man once said, excuses are like a*******, everybody’s got them and they all stink.” This event wasn’t just a one-off thing. As Felix Medina, a 2022 grad and former wrestler stated, “It was a great comeback, great revenge. There were some matches we could’ve won, but we got the win anyways, so it doesn’t matter.” Overall, this match allowed people to better know the sport and what goes on during it. It demonstrated a glimpse of what is yet to come. Go show some support!