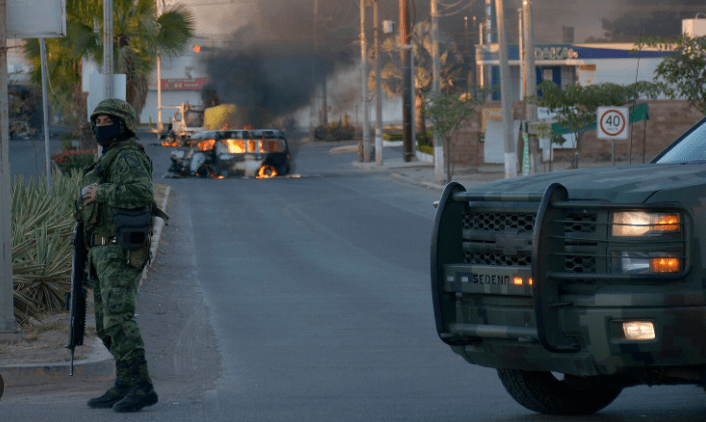 Ovidio Guzman Lopez known as “El Raton,” son of infamous cartel leader Joaquin “El Chapo” Guzman, has been arrested. Ovidio is wanted in the United States for smuggling Fentanyl across the border. Ovidio was arrested on January 5 while eating at a restaurant with 8 of his men and his wife. 3,586 Soldiers were involved in this arrest. The Mexican Government claims that they are proud of Ovidio’s arrest as he is one of the High- Ranking heads in the Sinaloa Cartel.  It had been suspected that Ovidio was left in charge of his father’s Cartel business while his father faced life imprisonment in the United States.

Ovidio was previously arrested back in 2019 in Culiacan but was let go because of Cartel pressure. President Andres Manuel Lopez Obrador said, “The situation had become very difficult and many citizens were at risk.”

After Ovidio’s arrest on the 5th, the Cartel began to show their anger at his arrest and started to burn buses and trucks down. This isn’t the only conflict that has happened after Ovidio’s arrest. There was a violent raid launched by the Cartel at an airport which resulted in a plane getting in the middle of a fight between the Cartel and the Mexican army. The plane that was in the middle of the fight was Aeromexico and was set to fly out to Mexico City but was disrupted after getting shot at by the Cartel. Nobody was killed or injured and the trips to Mazatlan and Culican were canceled. The Sinaloa Cartel had launched attacks around Culican and around the states of Sinaloa.

Now that Ovidio has been arrested, there’s been conflict between the Mexican government and the Cartel. However, the people of Sinaloa have been the most affected. Students of all ages were told to stay home as President Andres Obrador canceled school, afraid the cartel would show their anger by hurting the schools.

Jesus Maria, a city in Culiacan, was the epicenter of Ovidio Guzman’s operation. 140 people have gone missing after Ovidio’s arrest in Jesus Maria. Men and Women ages 12-35. About 200 people have gone to protest at the government palace about the missing people. The people who went to protest accused the Mexican army of Human Rights Violations. Some Protesters were so angry that they broke some glass in the doors of the government palace. Later the town’s electricity, water, and telecommunications were all shut off.

In Culiacan, the votes for the success of the capture were low compared to the nation’s opinion. 51% of people from Culican believed the capture to be a success. The nation voted 66% for success. Now for safety, the nation claimed they felt 42% more safer and 29% saw no change in security. Culican voted only 17% of people felt safer.
Ovidio is now in Altiplano maximum security federal prison where his father was in 2001 and 2015. There has been news that the Mexican Government wants to extradite Ovidio to the United States. We now wait to see what will happen to Ovidio and the Government.