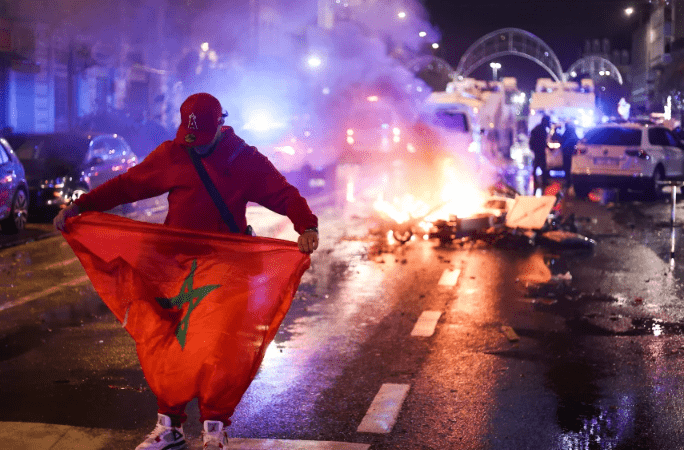 In spite of Morocco’s success and loss in this year’s FIFA World Cup, tensions continue to boil over as riots seem to be never-ending.

Morocco came into this year’s World Cup as underdogs and shocked the world with their historic run. Morocco took their first World Cup victory against Belgium, 2-0. Many thought it was a fluke until they continued to shine, defeating Spain, 3-0. But the shot heard around the world was the nail biting game against Portugal that ended in a 1-0 victory. Morocco became the first African and Arab team to advance to the semi-finals in World Cup history, according to NPR. Their surprising success came to a halt after their loss to France, 2-0, on December 14th in the semi-finals.

However, their victories haven’t exactly produced appropriate celebration. In fact, Belgian fans were outraged. CNN reports that Belgian citizens were detained after riots erupted as a result of Belgium’s loss in Brussels.

A report issued to CNN by Brussels police states, “…dozens of masked persons sought a confrontation with the security services, jeopardizing public safety… immediately decided to proceed to a police intervention, with the use of a water cannon and tear gas…Calm returned around 7 p.m. and preventive patrols are still present in the sectors concerned…”

The report also recalls mass property damage, including a car and electric scooters set on fire, and that parents would be held accountable for said damage caused by the young rioters. Regardless, the riots seemed to be handled and under control.

Sadly, this was not the case everywhere. Riots in Qatar continued not long before Morocco’s win against Spain. An article by The Guardian reported that many fights broke out between riot police and Moroccan supporters, as hundreds of ticketless fans tried to force their way into the stadium. One social media video shows a woman voicing concern for a baby possibly being trampled due to the excessive amount of people while another displays riot police crushing fans as fights raged on.

“Long before kick-off, multiple checkpoints were set up outside the metro station, with fans asked to show their tickets at each stage…police blocked the main entrance amid fears that fans without tickets were trying to barge through…It was unclear how many people outside the stadium had tickets and how many did not,” the article states.

In the end, the unrest was quelled and remaining fans watched the game on their phones. Despite the uncertainty of how many people with tickets were turned away, the article reports a full house at a capacity of 44,667.

Still, Spain was not the end of this excessive fandom. Though seemingly much less violent, celebration in London that emerged after the Moroccan victory against Portugal became too much. As reported in The Daily Mail, celebration started off harmless with car horn beeping and vocal exclamation. Police presence was needed as they tried to control the crowd filled with  fights between celebrators and police. Regardless, the crowd was relatively harmless.

The same cannot be said for France. After their initial high, Morocco was officially beaten for the first time in this year’s World Cup by France. This produced the worst of the riots. Another article by The Daily Mail reported that the French riot police had prepared for overzealous behavior after the game, regardless of the outcome. However, the riots were more than what police planned for. The article reports that in the midst of violent celebrations in Paris, a 14-year-old boy was killed.

The article states, “The boy, 14, was part of a large group of what appeared to be Moroccan supporters marauding…they happened upon a white hatchback with a French flag flying out of its window…[attempted] to rip the flag away from its owner, when the driver panicked and performed a hasty U-turn to cross into the oncoming lane…could not react in time and the teenager was sucked under the wheels, sustaining critical injuries…transferred to a nearby hospital but later died.”

Within this tragedy, it is still unclear if the behavior has simmered and calmed as of December 15th. This unrest rather unfortunately takes away from the historic and applaud-worthy efforts of the Moroccan soccer team.

Morocco’s highs and lows in this year’s World Cup seemingly resulted in overwhelming violence. Were these riots just the result of overwhelming support and distaste for the Morrocco team? Or was this just another example of the kind of deviancy the World Cup is capable of exuding from its fans?