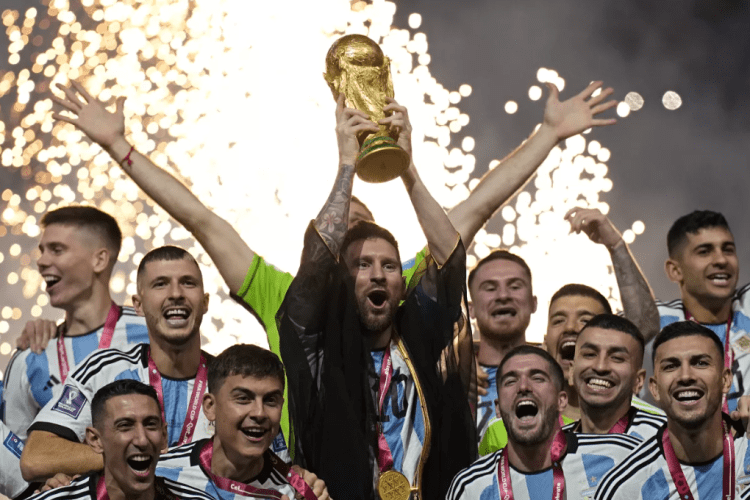 Written By: The Port Light Staff

Greatness has finally been achieved in full for Lionel Messi.

The Argentinian star had conquered every mountain of soccer in his career except for one, a World Cup championship, until Sunday. Messi scored two goals and added one more during the penalty kick on the way to Argentina’s 4-2 penalty shots (3-3 original score) World Cup victory over France in Qatar. The win marked the third World Cup victory (1978, 1986, 2022) for Argentina in their history and helped move Messi to the same legendary status in his home country as his idol, the late, great Diego Maradona.

At Lusail Stadium in Doha, Qatar, the stadium and the world were buzzing with anticipation. Argentina got things going early on after Angel Di Maria drew a penalty in the box in the 23rd minute. Messi confidently stepped up and buried the penalty shot in the right side of the net to put Argentia up 1-0.

Angel Di Maria later tallied one on the score sheet for himself, as some beautiful Argentinian passing worked its way across the box and onto the waiting left foot of Di Maria to put Argentia up 2-0 36 minutes into the Final.

At this point, France knew a change was needed, or changes. Before the end of the first half, in a bit of a shocking move, France substituted out Olivier Giroud and Ousmane Dembele in an attempt to change the direction of the game. Argentina ended the first half with a commanding 2-0 lead.

In a matter of moments late in the game, however, Buenos Aires was silenced as all momentum shifted to the French side. Kylian Mbappe netted a penalty kick for France in the 80th minute of the game, then scored a stunning volley from about 18 yards out just a minute later to tie the game 2-2.

For much of the game, it really appeared to be Argentina vs. Kylian Mbappe, as the 23-year-old Frenchman stepped up for his team on the world’s biggest stage, but didn’t get much support in the process. However, this was all France needed to bring the World Cup Final into extra time.

In the 108th minute of the game in extra time, Lionel Messi found magic for Argentina yet again. After some gorgeous passing, Lautaro Martinez had his shot saved up close, but Messi was able to knock in the rebound to score his second goal of the game and give Argentina a 3-2 lead. The goal had to be reviewed to make sure it crossed the line before it was saved, but replay confirmed.

Kylian Mbappe would not be denied, though. In the 118th minute, with just two minutes left to spare, a foul was committed in the box against Argentina. Mbappe calmly stepped up and smashed the penalty shot home to tie the game back up at 3, securing a hat trick for Mbappe. Off to a penalty kick shootout the game went.

The penalties started with France. Mbappe scored the first goal for France, making it his third penalty kick goal of the game. But Messi would not be outdone by his PSG teammate, scoring the first PK goal for Argentina.

Argentinian goalie Emiliano Martinez then came up big, saving the next French attempt and helping force the third attempt wide of the net, putting Argentina firmly in the driver’s seat. The final and winning shot for the World Cup was from defender Gonzalo Montiel who scored on the left bottom of the goal, ending the PK shootout with a 4-2 Argentina victory.

Argentina’s win was a legacy moment and a memorable honor for all. Many fans were glad to see that Lionel Messi achieved his dream. Head Coach Lionel Scaloni spoke after winning the Cup.

“I cannot believe what we have suffered so much in a perfect game,” Scaloni told reporters. “Unbelievable, but this team responds to everything. I am proud of the work they did. It is an exciting group. With the blows we received today, with the draws, this makes you emotional. I want to tell people to enjoy; it’s a historic moment for our country.”