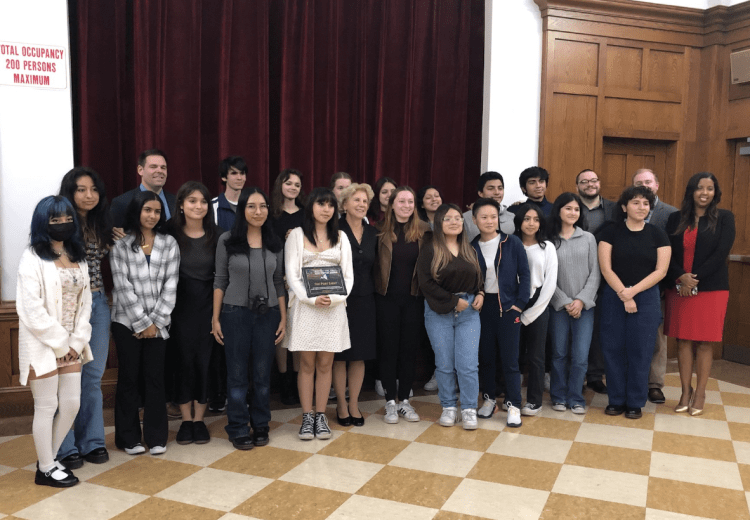 The Port Light received the Empire Award from the New York State Senate.  The award was given to the staff of the paper, advisors, administrators and parents in a ceremony on December 7 by State Senator Shelley Mayor.

Back in November, The Port Light’s administrators received an email from Senator Mayer’s office. The email accosted to The Port Light’s major success in reporting on and advocating for major topics in the Port Chester community and even on global issues.

The Empire Award is given by the New York State Senate to small businesses and nonprofit organizations that make outstanding contributions to the betterment of their community and to New York State. The Port Light received this recognition due to its dedicated group that works hard each day to voice their opinions and advocate on their community, nation, and planet.

Although The Port Light has only been releasing issues since the start of this school year, it is seen as impressive by the senate since the club hadn’t released an issue prior to this September for nearly 10 years.

Much of the credit for the success of the newspaper was given to Shirley Guzman Montano, the editor-in-chief of the newspaper. Prior to the initiation of The Port Light, Shirley had aspirations to “revive” the school’s previous newspaper. Shirley took initiative and her passion for writing and created a warm and inviting community of talented writers with the help of Mr. Glazer and Mr. Thomas, the team’s advisors.

Mr. Thomas was emotionally charged as he approached the podium to speak. It was clear that he’s proud of being one of the leaders of the talented group. “I’m just so honored to be able to work with all of you and be able to see your voices come to life and have people know how amazing and special you all are,” said Mr. Thomas.

Present at the event was the principal of Port Chester High School, Mr. Luke Sotherden. He stated, “We’re thankful for the teachers who run this. They put in a tremendous amount of work on this and they do it for their students. That’s truly why they’re doing it, they see the excitement and that drives them. That’s really what makes teachers like them special, they do everything they do for their students.”

Both Mr. Thomas and Mr. Glazer have made grandiose contributions to The Port Light. It’s a big commitment on their behalfs to be advisors. As stated, the enthusiasm seen in the members is what fuels their optimism for the team. The Port Light’s meetings are always full of conversation between its members and helpful advisors. Having had experience as a journalist, Mr. Thomas provides an area of expertise for his students.

To end the event, Senator Mayer invited The Port Light’s staff to the NYS Legislature in Albany where they will see “democracy in action.” The date is to be determined, but The Port Light is excited about the opportunity.

The Port Light has accomplished much in a short amount of time. The members are optimistic about the future, expecting the club to continue to grow in size, interest, and acknowledgement.