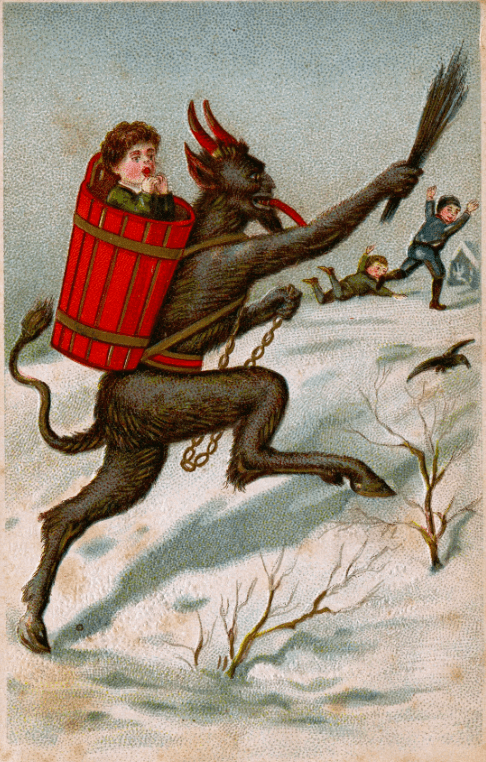 Krampus– half-man, half-goat– is a mythical creature from stories told in the Eastern and Central Alpine region. The folklore is said to date back to the 6th and 7th century CE, although written accounts have only been recorded since the 16th century. Krampus is thought to have been a part of pagan rituals celebrating the winter solstice, but merged with Christmas traditions and stories as Christianity spread throughout the region.

Krampus’s appearance is typically associated with Satan, the Christian devil. This is depicted in his physical image: a goatman that bears a long pointed tongue and horns and is wrapped in chains. Pagan influences to his appearance are seen through bells sometimes attached to the chains and the bundle of birch branches he is said to carry.

Krampus is the antithesis of St. Nicholas. On the eve of December 5th, Krampusnacht, (night of Krampus), Krampus and St. Nicholas both venture out into the snowy terrain. As St. Nicholas visits children to reward them with presents for being nice, Krampus goes around punishing kids for being naughty. His punishments range from beating children with his birch branches to eating them or taking them to Hell. These terrifying deeds are thought to have been told to scare kids year round into being nice– or else Krampus will get them.

The Krampus tradition has turned more jovial as festivals such Krampuslauf have become popular. Krampuslauf, meaning “Krampus Run”, is an event where drunken adults parade the streets in Krampus costumes to scare children and spectators alike. The run began as a last ditch effort to preserve cultural heritage in the region.

Another tradition is Krampuskarten. In the 1890s, the postcard industry in Germany and Austria experienced an explosion in popularity, and this greeting-card giving tradition was born. On the outside, most cards say “Gruss vom Krampus!” (Greetings from Krampus!) and contain lighter-toned or humorous rhymes or poems inside. Older cards tended to depict Krampus in a scarier light, although newer cards depict Krampus in a light-hearted cartoon fashion.

Krampus is a unique Christmas-related tradition in the central European alpine region. Although he may not have the means to beat or steal children across the Atlantic Ocean here in New York, spreading his legacy is a unique way to make the holiday season more exciting! The more you know, the more you will be safe from Krampus’s wrath.