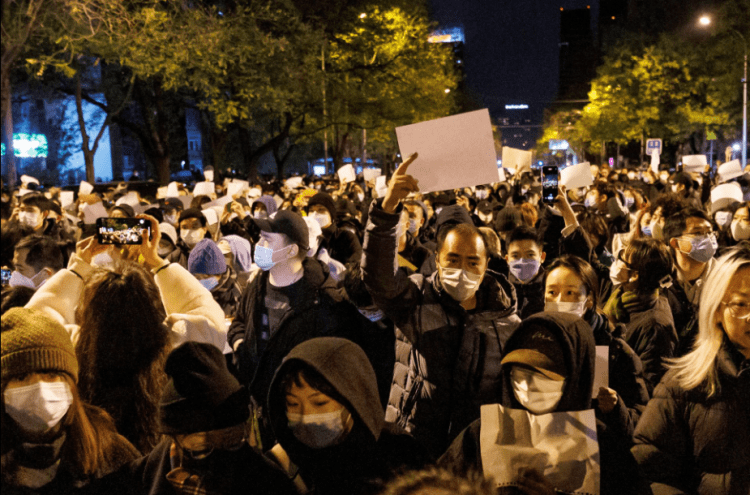 In late December 2019, China reported their first COVID-19 case within Wuhan, located in the Hubei province of central China. Now in 2022, China is defending its zero-COVID policy in the face of massive protests within the country.

When protests appear within China, they are usually brief and suppressed quickly due to a high amount of surveillance and quick response from state forces. However, in this scenario, there seems to be a different cause to why the Chinese people are protesting. On November 24, an apartment building in Urumqi, the capital of northwestern Xinjian, burned down. This event took the lives of 10 people. Many suggest that the COVID measures delayed first responders, leading to public unrest in China.

As a response to the massive protests and outcry from the public, China seems to be lashing out in regards to their zero-COVID prevention policies. Around November 26-27, people flooded the streets demanding that President Xi Jiping stand down. Police officers were seen on November 29 in large numbers in parts of Beijing and Shanghai where demonstrations were held. The Communist Party’s Central Political and Legal Affairs Commission said it was “necessary to crackdown on infiltration and sabotage activities by hostile forces in accordance with the law”. Those who seem to be against the policy or were seen/heard criticizing the government have been either arrested or beaten.

When the pandemic first hit, China was successful in suppressing the virus. Despite this, as new variants and mutations have emerged, more outbreaks within the country have become frequent. China refuses to use international vaccines and is only using domestically developed ones instead, even if they are found to be less effective than those commonly used in other countries. Due to low vaccination rates and a lack of natural immunity among China’s population, it is estimated that two million people can be at risk of death if the policy is to be lifted. Recent data shows China has fewer than five critical care beds per 100,000 people, which is lower than Taiwan (30 per 10,000), or South Korea and Thailand (10 per 10,000).
Public officials seem to defend the zero-COVID policy by stating that it has kept the infections at bay in China. However, the public seems to blame the policy for deaths that could have been prevented if there had been quicker responses by medical personnel. A 4-year-old girl who suffered from vomiting and diarrhea was said to not have been able to receive help for 11 hours. She died on November 17. A 3-year-old boy died from carbon monoxide poisoning on October 31. He was unable to get help from health workers in the city of Lanzhou because the boy’s father was stopped from taking his son to a hospital. The anti-COVID measures are seemingly more than making up for their success with COVID with a lack of care for other medical emergencies.