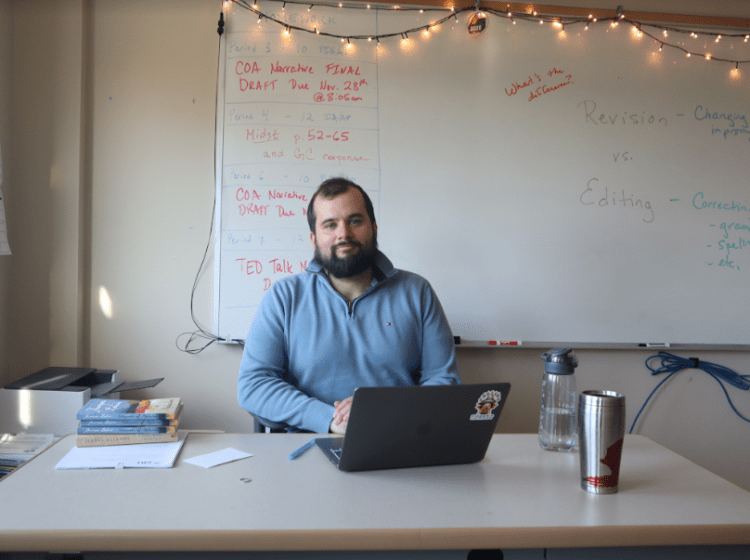 To some, Port Chester High School is just high school. For others, though, these hallways have become like a home that has nurtured and supported them throughout their teenage years. One of those (former) students is PCHS’ very own English teacher Mr. Guarino, who loved PCHS so much that he decided to stay and teach new generations of PC students.

Mr. Guarino, throughout his time growing up in Port Chester, credits the town and its community for giving him a sense of belonging and support. But he also knew that while he had a positive schooling experience, not everyone had the same privilege and made it his mission to give back to his community. “I did recognize that nationally and globally to some extent there is an equity issue in public schooling. I’ve always had an eye to give back, especially to this community that has given me a lot. So I figured that education would be a great avenue to do that,” shares Mr. Guarino.

Some students might not know that Mr. Guarino originally planned on becoming a Math teacher, but ultimately chose to teach English.“I like that English is a subject where you can teach the whole person,” he says. “You can have conversations about morality, you can discuss the pertinent topics of the day, you know. English teachers have a lot more leeway to learn about their students, discuss emotions, and connect with them.”

He began his teaching career out of college in a school in the South Bronx: “It was an amazing experience that I loved very much. But it’s always been my dream to come back to PC.” Many students agree they are glad Mr. Guarino chose to make PCHS his home. As a teacher, his humor and distinct love for what he does has made him a favorite among his students as evinced by a Mr. Guarino fanpage on Instagram maintained by his former students.

“The students are the best part,” said Mr. Guarino when asked what his favorite part of his job is. “Being from Port Chester I take a certain amount of pride when I see a student succeed academically or see students participate in the band or athletics and drama club.”

He emphasized the importance of getting involved in the school community whether it be academically or through extracurriculars, especially since now those opportunities are more accessible to students.

Mr. Guarino shares that, “When I was here, IB did not exist. When I was here, my AP Lit class had 13 students. Now in IB Year 2, which is the equivalent of AP Lit, we have over 160 students enrolled.”

Port Chester High School today is drastically different, he says, from when he was a student here, and for the better.

“I’ve been transparent that when I was here there was not the same eye towards inclusivity that has been developed. The advanced classes reflect the demographics of the community more closely which I think is huge. Also just major developments like having the LGBTQ flag raised last June. Those are things that I’m so proud of because they show the progress that have been made in this community. The amount of students doing things like IB just shows that we are willing to provide opportunity and access to so many students while many other districts still gatekeep these programs, which is something I am so incredibly proud of,” he adds.

As Mr. Guarino reflected on his time in Port Chester High School, he also credits one extracurricular to have been the most important for him during his youth: marching band. “I credit that activity with exposing me to many of the things that ended up shaping many parts of my life. A sense of discipline, a sense of pride, a sense of joy.”

His love for the band didn’t end after graduation. Mr. Guarino explains joining the band as a staff member and helping to teach the drummers, the instrument he played as a student. Now, he serves as the Drum Instructor for the band.

Like many others, Mr. Guarino also found comfort and community within the band. After spending so many nights practicing, band camp, and day-long competitions, it’s expected that fellow band members would become more like family.

“I think I would have been far more of a loner, admittedly, without band so I owe that program and the people involved with it quite a bit,” shares Mr. Guarino. “Growing up being a little quiet, it was sort of hard to figure out where I fit in. But then I got to high school and I immediately had 125 people that were similar to me and cared about the same things I did. It was the built-in support system that wouldn’t have existed if the program did not exist.”

To students that are currently struggling and looking for their own support system he gives this advice: “Don’t be afraid to ask for help. Whether we’re talking academically, whether we’re talking with friends, or mental health. When you need help, ask for it, lean on other people, and be supportive of others when you can.”

Even today, he remembers his days of marching band fondly, stating that, “My favorite part of the band was first period everyday, like I would love to relive that. The jokes, the getting here a couple minutes late without the instructor noticing, all good times.”

Mr. Guarino also went on to play in the Jazz Band, a program that takes place during the winter. He says that he gained an appreciation for the genre thanks to his father. “ My dad grew up in the 60s so his favorite music became my favorite music. He turned me onto jazz like John Coltrane and Miles Davis. After my dad turned me onto those things I was in the Jazz Band here and got exposed to a lot of great Jazz music.”

From marching band to jazz band, it is no surprise that music plays a large role in Mr. Guarino’s life. It’s an interest that transcends into his free time and hobbies. “Well I love music so I play drums myself but I also collect vinyl records.”

And what type of music does Mr. Guarino enjoy and collect?

“This is cliche but everything except country,” he says. “A lot of classic rock, particularly new wave and punk. Lots of 90s grunge, a lot of old school hip hop. Also music from my parents’ generation.. A lot of my collection is old school jazz music. So jazz and rock, a little bit of hip hop but zero country.”

In addition to music, he shares that he loves the beach, sports (“particularly the Knicks, Giants, and Yankees”), and, most importantly, his 18-month old niece, whom he frequently visits in Queens.

Being an English teacher, he of course also enjoys reading, specifically non-fiction at the moment Chuck Klosterman. He also states he’s always been “a fiction guy” and reaching for his favorite authors including Elena Ferrante, Jhumpa Lahiri, and John Steinbeck.

“I love cooking too,” Mr Guarino adds. As an Italian-American, where food is an integral part of the culture, he shares that it creates a “strong connection” to his background and family.

“I’m always exploring my ethnic roots through food and travel and things like that.”

He describes currently trying to perfect his perfect pizza recipe, one of his favorite Italian dishes along with pasta. But even as a cook, with a deep appreciation for food, he can’t resist McDonalds.

“My favorite thing on the face of the planet is actually McDonalds chicken nuggets. With Sweet n Sour sauce.”