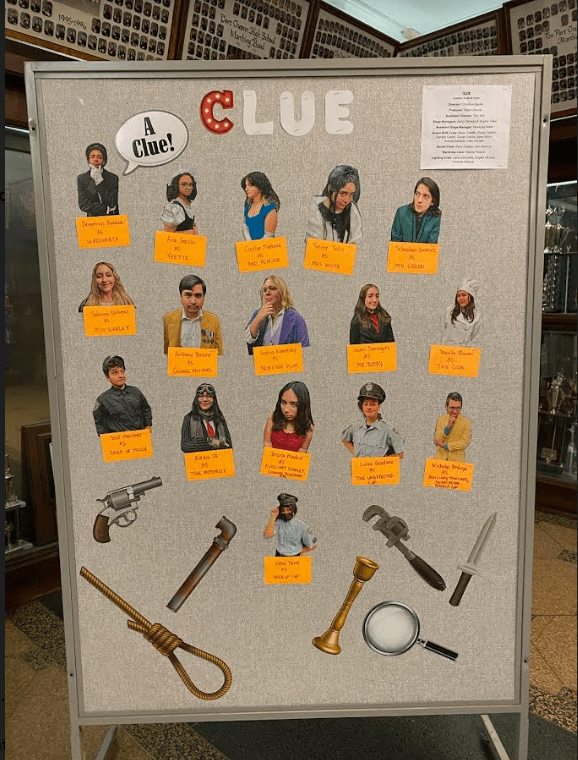 Everyone knows the classic murder mystery board game “Clue.” When the Port Chester High School Drama Club announced that their fall production would be a play adaptation of it, excitement built among the community.

Clue is a game built on a process of elimination in which players attempt to solve the murder of Mr. Boddy, the unseen host of the gathering. The game requires players to investigate one another and find out key details about the murder such as what room he was killed in and with which weapon. The game has six different weapons such as a dagger or revolver. Additionally, it has six different unique characters, allowing up to six players at one time. The game began mass production in 1949 in the United Kingdom but was first invented by Anthony E. Pratt during World War II to be played as a pastime during German air raids. Since then it has been adapted into a 1985 motion picture, as well as an off-broadway musical in 1997.

The drama club at PCHS had been working towards the premiere of their new fall play since the beginning of the school year. This was their first “normal” production since Covid hit in the 2019-2020 school year. For nearly two years, the Drama Club had been limited to virtual performances, small budgets, and smaller audiences due to the pandemic. “Last year we still had masks so we were limited,” said high school thespian Gwen Dominguez. She explained how in last year’s production, the members of the drama club had to compose their own costumes of things they had already owned or brought from home. They worked with what they had in hopes to bring back the love of theater through their first live performance since 2019. This year, the drama club was able to raise money for their fall production and better spread the word to people in their community.

The students of Port Chester High School were able to show off all of their hard work on Thursday, November 17th. The immensely talented cast was able to show off their skills to a fairly large audience, and show off they did. Their opening night performance can only be described as spectacular with perfectly delivered and hilarious lines.

There is no doubt that each of their performances success is due to the perfected casting, it’s hard to imagine any of the characters being played by anyone else. Whether that be Gwen Dominguez’s (Mr. Boddy) hilariously perfect New York-Italian accent or Demetrius Haddock’s (Wadsworth) overdramatized and comedic death, each member of this cast brought a unique and memorable take on every character. One of the most memorable line delivered comes from Caelyn Matturro playing Mrs. Peacock. When asked if she wanted an alcoholic beverage, she replied; “my lips belong to the lord.” There are plenty of more memorable moments, far too many to list them all.

While the cast brought the production to a whole new level, it would have not been possible without the hard work behind the scenes. All the students who worked tirelessly in the shadows whether they were manning the sound system, working as the stage crew, selling tickets, or ushering audience members to their seats, they all deserve recognition for the very big role they played in the production’s success.

The Drama Club’s fall production of “Clue” proved to be a great return to the PCHS stage, providing a comedy filled atmosphere and certainly a memorable night for any audience member. Each of their three performances were nothing short of wonderful and eloquent.