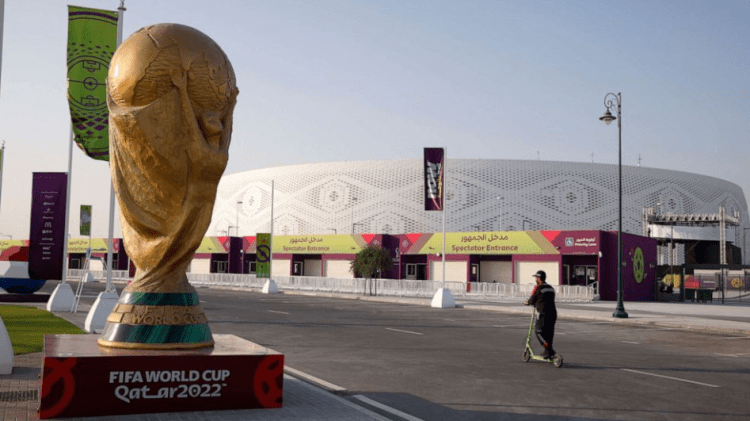 People all around the world are keeping up with this year’s FIFA World Cup. However, what lies under the surface of “the most prestigious tournament in the world,” is the controversy surrounding this event being held in Qatar. Lack of space, overall environment, bribery, and human rights violations, have all become a main aspect in the conversation with regards to the FIFA World Cup Qatar 2022.

The lack of space is a big issue. All of Qatar is smaller than the state of Connecticut by around 20%. Of Qatar’s 2.8 million people, most live around the capital Doha as the tournament is being held just north of the capital. This also entails Qatar’s lack of many requirements needed to host an event such as the World Cup, including highways, hotels, and seven stadiums. To top it all off, the country’s overall environment is an issue that coincides. While It is already a small country with everyone to be squeezed together, its climate doesn’t help. The climate is dry, hot, and humid simultaneously throughout the year. Average daily temperatures can reach around 90 degrees Fahrenheit. These factors raise concern for athletes participating in the World Cup.

Other, and arguably bigger, issues being discussed are Qatar’s abundance of bribery allegations and its abundance of human rights violations. Qatar had previously been accused by U.S. officials that the country had bribed their way into the privilege of hosting this year’s World Cup, seeing as though the country would just not be a top pick for an appropriate place to hold an event of such stature. Former FIFA President Sepp Blatter quotes, “It was a bad choice.” regarding the selection of Qatar, and regretfully takes responsibility for it. As of recent, Qatar is alleged to have offered athletes and FIFA officials tens of millions of dollars to encourage Ecuador to throw their match and give Qatar the win. In the end Qatar lost, becoming the first ever nation to host the World Cup and lose the opening match

Amidst this concern for the athletes, there is also concern for Qatar’s own people. Of the 2.8 million residents, only around 300,000 are actually Qatar citizens. The rest are migrant workers. This is because of a common Middle Eastern system in which visas are attached to work employment. Many migrant workers, especially from the rapid increase in back breaking labor to build all of the requirements for this event that Qatar needs, are being violated. Studies have shown that more than 6,500 migrant workers have died in Qatar. Workplace deaths, suicide, working in high temperatures with no access to food or water for hours on end, even unexplainable deaths. Migrant worker death tolls have increasingly risen, though Qatar claims to have only 6 migrant workers died in work related environments and FIFA claims only a little over 30 deaths of migrant workers have occurred and none were work related.

Visitors may face troubles, too. Qatar follows many laws that criminalize rape victims and homosexuality. Team captains from Germany, England, Denmark, the Netherlands, Belgium, and Wales all agreed to wear armbands that signify support for diversity and inclusion. However, FIFA, citing its recognized stances on anti-activism, have made it clear that though the armbands are not banned from matches, anyone wearing an armband will face an automatic yellow card. This has forced the team captains to abandon the show of support. Qatar officials stress that though visitors are welcome, they must respect the local “rules” and “culture.” Failure to comply will likely result in harassment from law enforcement, prison time up to 7 years, and/or conversion therapy.

Overall, FIFA World Cup Qatar 2022 is an exciting event for the majority of people around the world, and people should not feel bad about enjoying the event. However, people must also acknowledge the controversy surrounding holding this event in Qatar and recognize why and how it is rightfully controversial.