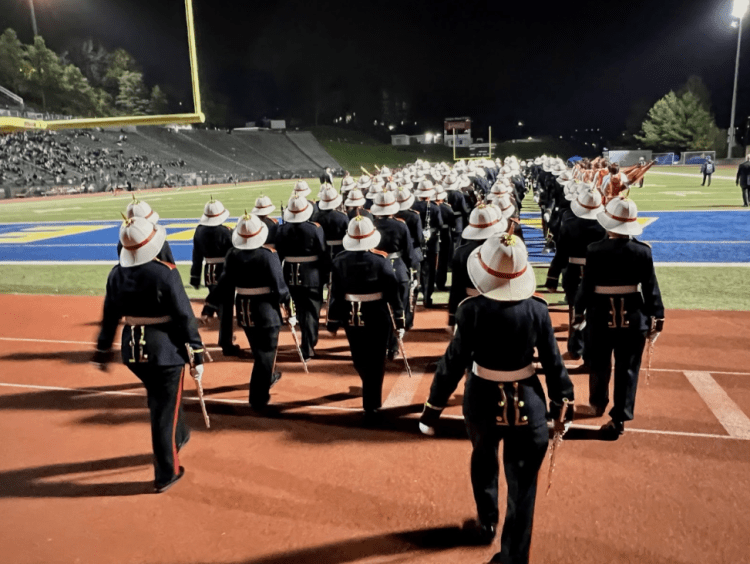 The Pride of Port Chester returned to the USBands National Championships at Allentown, PA on Saturday November fifth. It was the first time since 2019 that Port Chester traveled to Allentown for Nationals with only the senior class performing there prior. The Port Chester band was able to place second in their class.

Port Chester began their day at King Street School, starting practice at 12 pm. The band warmed up in basics before quickly moving to music ensemble, being restricted to a mere 2 hours and 45 minutes for practice. After an emotional final run-through of the season, students were able to enjoy a potluck dinner before having to load the buses and set off.

Band members were extremely eager to swap out the school buses that had taken them to previous competitions for three coach buses, a staple of the Allentown trip. Senior Color Guard member Juliana Lopez joked that the buses provided “better quality sleep” than her own bed.

The band arrived at Allentown around 7:00 PM with many students being more than happy to get on their feet after an over 2 hour bus ride. After unpacking instruments, their other equipment, and receiving their helmets, the band marched over for warm ups where the beauty of the Allentown site really started to show. Even in the dark, the park where warm ups were held was a beautiful sight.

The band performed at approximately 9:30 and gave one of their best performances of the season. Port Chester would ultimately place second, with a score of 91.6. Though many may see this as a loss, band members say it’s not that simple. Band President Sophia Kamensky commented, “It felt great. Even though there was a tear, we recovered, which is the most important thing.” A rocky start wasn’t enough to squash PC’s thunder. They recovered with ease just as Kamensky said. The band placed above Ramsey High School, who beat them at the Ludwig Musser Classic, where they scored third to PC’s fourth.

The band’s success is owed in huge part to this year’s senior class. Junior Saxophone player, Nataly Garcia, while speaking about the seniors said: “They [the seniors] had so much energy and that really helped us not be as nervous as most of us could have been.” The seniors also had a lasting impression after all was said and done, showing how much of a leader they had become. “Although it was a sad ending, knowing that it was our last competition together with them brought more celebration than sadness,” Garcia added.

Overall the band’s final competition was a memorable one with it being the final one for seniors and the first at Allentown for everyone else. The Pride of Port Chester was happy and, of course, very proud of their score. With this success, the 2022 band season comes to a close, but it isn’t the end for the Pride of Port Chester. We’ll just have to wait until next year to see more of the amazing band.