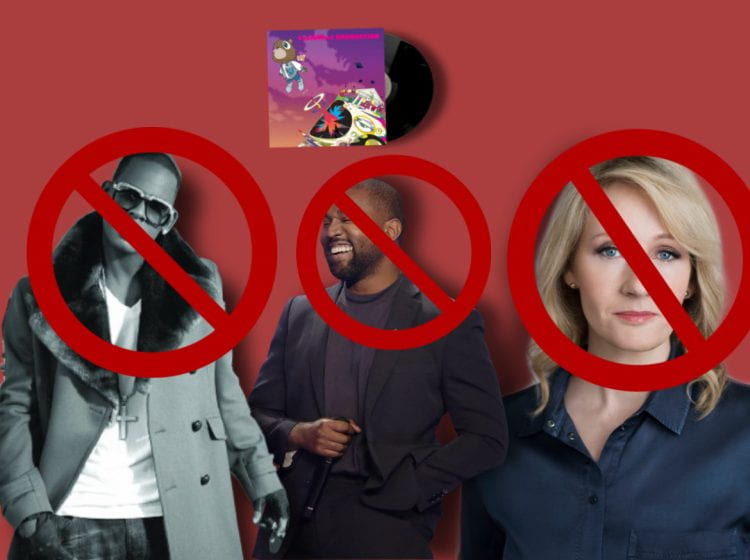 Roland Barthes was a French Essayist best known for his 1967 work, The Death of the Author. This work presents the theory that a published piece of work is no longer the author’s to give meaning to, but rather the public’s. This means that an author’s intention behind a piece of work could transform when it is put out into the world. The only people meant to interpret it are the public, essentially separating the art from the artist.

Many artists have committed shameful acts. Some prime examples are R. Kelly, Kanye West, and J.K. Rowling. R. Kelly has had allegations of sexual misconduct toward fans who were minors dating back to the 90s. He has recently been convicted of child pornography and enticing a minor. Kanye West has made many public anti-Black and antisemetic comments on his social media accounts. J.K. Rowling has posted a number of transphobic comments on her Twitter account.

Many people have decided to abstain from indulging in any projects from these three individuals. Former supporters of these artists believe that boycotting the art produced by the artists shows their stance on the issue. Separating the artists’ work from their individual selves is not possible for some.  They feel that the art is an extension of the individual. Whatever morally or ethically wrong actions committed are immediately attached to the art, and therefore make it impossible for some to consume their art. The LGBTQ community, for example, has spoken out against J.K. Rowling for her transphobic tweets.

Others feel that the art can be separated from the artist. R. Kelly fans do not believe that he is guilty of such accusations and continue streaming his critically acclaimed hits like “Step in the Name of Love.” Kanye West fans blame his social media outbursts on the death of his mother or other family issues that have gone public. Others believe that the certified classic, “Late Registration,” should still hold its fame regardless of his current beliefs. Some Harry Potter fans have continued to support J.K. Rowling’s art while also holding her morals accountable.

Beauty is in the eye of the beholder. There are people who are able to consume the art of controversial figures while others consider it morally wrong to support them. Wherever you stand on such a spectrum greatly dictates what kind of person you are and how you are perceived.