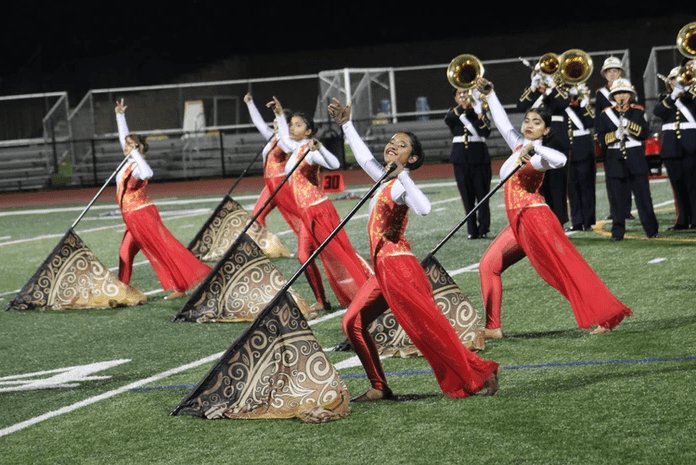 The PCHS Marching Band is often called the Pride of Port Chester, and rightfully so. With its fine musicality and exceptional field drill, the band has continuously proved itself to be the heart of PCHS. Yet its place in the community could not have been possible without the vibrant and talented performances by the color guard.

The purpose of the guard is simple: add character and flair to the band’s musical performance. As Mehak Singh, a senior guard member, says, “We [the color guard] project the emotion of the song and connect to the audience.” Through the Color Guard’s synchronized dances, divided into sections of flag work, sabers, and rifles, they have become an integral part of any marching band performance.

The Port Chester High School Color Guard is no different. Every summer and fall, the guard, led by the instructor Maria White, goes through intense preparation so that their season’s performance is as coordinated and graceful as it can be to complement the band’s music. Year after year, they experience triumph and success, such as their first place win in last year’s 2021 Yamaha Cup National Championships.

Following last year’s 70s inspired The Beatles theme, the color guard has outdone itself again. The band’s current theme, España, embraces Spanish melodies in their tracklist including “España”, “Bolero”, and “Malagueña.” Through their routine and colorful costumes the color guard has perfectly encapsulated the spirit of “España.”

Starting with “España,” the audience is immediately captivated by the graceful solo performance of senior member, Sophia Ortiz-Heaney. Adorned in bright red and yellow flags, the guard creates a mesmerizing, goosebump-inducing display of Spanish culture and talent. The color guard uses sharp, fast-paced movements to go along with the intense and exciting opener. Then there is the rifle line, of course, and their skillful spinning that never fails to awe the crowd, most notably during the song’s musical break.

Perhaps a fan-favorite among the color guard is “Malagueña.” The energy exerted by this closing track was definitely one that topped the exciting opener and the color guards performance undeniably added the cherry on top to the experience of the song. The dance line, consisting of Sophia Ortiz-Heaney, Laura Lopes, Arlinne Lucero, and Alejandra Ruiz, give a Flamenco inspired routine that makes the slow intro of “Malagueña,” which progressively gets more intense until it reaches a full crescendo, all the more satisfying. The highlight of this track, however, might be the rifle lines routine during the trumpet quartet.

“When you do the rifle work, during the big-hit, you just feel like the main character, you know. You feel powerful,” shared David Bonilla.  All in all, the Port Chester Color Guard provided an unforgettable experience that undoubtedly surpassed last year.

This can be seen through the success of this fall season. The band has placed first place in almost every competition. On September 17th, they obtained a total of 72.2 points and got first place. On September 24th they once again came out as victors with a score of 79.1. At their MetLife competition, despite the band’s overall fourth place position, the color guard came in second place as the best color guard.

The color guard, who stated that they “started off rocky” during August band camp practices, credit their teamwork and dedication to get to where they are today. Due to changes in hiring schedules, guard instructors were unfortunately not present for some of band camp. Despite this, “we pushed through and together we’re progressing every day and supporting each other,” states Juliana Lopez. Sophia Ortiz-Heaney, a captain, also considers the struggles of band camp to be a “moment of metamorphosis” for the captains and senior members who had to take charge and lead the guard during the instructors absence.

“Here we are, a group of 28 guard members, half with little to no experience, the other half with only a year or two, and we were able to pull off getting first in every competition so far and second place at MetLife. We can only go up from here.” And up they will go as the season soon comes to a close on November fifth at their National Championships in Allentown, PA.

Images in this article are credited to the PCHSMB Website.

This article was edited on November 2 for clarification.