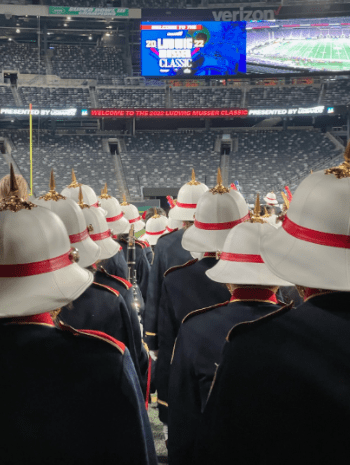 The Pride of Port Chester traveled to MetLife stadium for the USBands Ludwig Musser Classic on October 8th. Port Chester, in quite possibly their best performance of the season, competed with five other bands from New York and New Jersey. The band placed fourth with a score of 78.5. Although this is their first “loss” suffered since before the global pandemic, there was less than a four point gap between them and the first place winners, New Providence High School.

Nevertheless, the students still had a great time. MetLife is an amazing place to perform, and who doesn’t want to play music on a NFL field? As Juliana Lopez states,“It is an unforgettable experience.” Even though it would have been nice for the senior’s last performance at the stadium to have been a win, it was still a special performance.

For the new members, it was their first time performing at MetLife stadium, an experience they will not soon forget. Junior Alto Sax player, Nataly Garcia, who rejoined band this season after taking a year off said, “It was really exciting. Walking onto the field was amazing and seeing all our families cheering really helped to motivate me.” Walking out of that tunnel and onto the field is certainly a unique experience, one that all band members enjoy, once you take away the nerves, of course.

The band did a quick warm up in the parking lot before marching over to the entrance gate. Mr. Mike Miceli gave his signature “Who are we?” chants, getting the band riled up and ready to put on a great show. The band performed at 7:45 pm, returning to their buses to change before heading off to the awards ceremony. While they waited for the ceremony to begin, members were able to enjoy the great food MetLife has to offer, specifically their chicken tenders.

The score was a disappointment, but in the end the band accepted it, knowing, according to Jose De Paz, “that it just meant we have more room for improvement.” The performance itself was impressive and the band should still be proud of themselves. The Band President certainly is. President Kamensky pointed out that the band is “only getting better.” The band has continued to improve both musically and visually since band camp. While one might point out they dropped points from the last competition, one has to remember that different judges grade in different ways.

Fourth place won’t stop the band, however. The Pride of Port Chester led the Columbus Day Parade the very next day. They played “National Emblem” all the way down Westchester Ave, stopping in front of the Our Lady of Mercy church to play a snippet of their field show. The band also performed their field show the next weekend for a home PCHS crowd at homecoming.

The band’s mindset and eagerness to improve is especially important as with just two competitions remaining, the band is hoping to keep their titles as both State and National Champions.