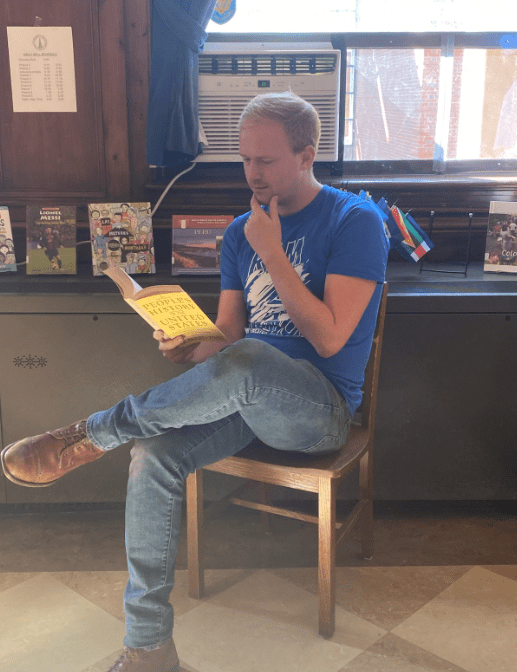 The first day of school came with its apprehensions, with the arrival of a new AP US History teacher. Everyone was a bit on edge, nervous to start the learning process again with a new teacher, Mr. Hartnett.

In the short amount of time he has been here, Mr. Hartnett has already begun assimilating himself into the school. He leads the Habitat for Humanity club and the Global Leaders club. He stated that one of his reasons for coming to Port Chester was its very diverse population: “We have a little bit of everybody in Port Chester, like a small melting pot.”

Before he came to PC, he taught at Frederick Douglass Academy III in the South Bronx. At his old school, he was a Special Education teacher and the head of the Special Ed department. He taught AP Social Studies classes there, so when he came to PCHS, he decided to take the job of becoming a history teacher.

Mr. Hartnett also ran track and cross country in high school and in college at Fordham University. In high school, he would run long-distance events, including the 5K and 10K events. He uses his knowledge about running a lot during his lessons; for example, he once gave an assignment called the Sim Essay. In running, a sim is usually meant for runners to focus on certain sections of a run, like a start off or the end. Like the Sim Run, the Sim Essay focused on certain parts of an essay to allow the student to strengthen a specific skill. This was a great way for students to break up their writing and learn what they need to improve on.

If Mr. Hartnett could travel anywhere in the world, he would love to travel to Spain or anywhere in South America to take his Spanish to the next level. He has learned how to speak Spanish from his students and can read in Spanish as well.

Mr. Hartnett was inspired in many ways when it came to his choice in becoming a teacher. His two favorite subjects in high school were science, and of course, social studies. His volunteer opportunities while at Fordham allowed him to meet kids and see what kind of an impact a good teacher can have on them.

Another amazing opportunity came to work at a school in Alaska for a summer. One of his friends, who led the trip, became a teacher and pushed him to do it, too.

When Mr. Hartnett graduated, there were no teaching jobs available, so he worked in finance for some time. He worked on Wall Street for a bit and then at Tripovizer.com. A year before his teaching journey began, his wife became a teacher. She works in the Bronx right around the corner from the old high school Mr.Hartnett used to work. She was a huge inspiration for him to start his own journey as a teacher, a path which we are lucky enough to have led him here, to Port Chester High School.