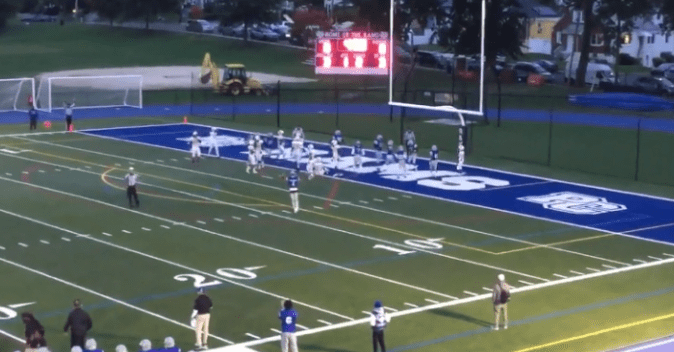 The last Friday in September was a chilly one, especially since the weather has started to get colder and darker once the sun sets and the last remnants of summer continue to fade away. However, the local neighborhood surrounding Port Chester High School was anything but dark on Sept. 30.

Students, parents, football players, cheerleaders, and band members could all be seen on the premises along with more supporters milling about sporting bright neon colors. Spirits were high because the PCHS football team was going into the game after a win the previous week against Poughkeepsie. Sept. 30 was the first home game of the season, but what made this game special was that it also happened to be the first night home game to take place in over a decade. As stated in the Oct. 7  edition of the Westmore News, “They [Port Chester varsity football team, in reference to their losses against Pelham, Spring Valley, and Horace Greeley] totally reversed course, looked like a different team and played like one as they came back to beat Poughkeepsie away 32-20 for their first win of the year and then made it two straight by upsetting Ramapo 29-8 under the lights last Friday (9/28) in their first night home game in more than a decade.”

PC’s opponent on their Sept. 30 home game was East Ramapo, which currently stands at a 2-4 win loss ratio (Port Chester stands at 3-3). Whether it was from the infectious music of the band or the contagious energy of the varsity cheerleaders and student section, the PC football team saw their first home win on the 30th with the final score at 29-8. Seniors Colin Taylor and Darwin Polanco emerged as a main force to get points on the board, with Taylor making 3 rushing touchdowns and Polanco scoring 1. The Barbour twins were additional hard hitters, along with Alexis Mendoza going strong in defense and Daniel Argudo as an efficient kicker scoring 4 back-to-back points. Key plays made throughout the game included: a 3 yard touchdown run and another 28 yard run in the 1st quarter, a 10 yard touchdown run and a fumble recovery in the 3rd quarter, and finally a 19 yard run in the 4th quarter.

While cheerleaders decked in neon colors lit up the track with bright smiles and energetic cheers, the band continuously pumped out lively pep tunes like the Avengers theme song, Hang on Sloopy, and Gonna Fly Now from Rocky. Both groups put on “a halftime show right out of the Hollywood script,” with cheerleaders performing fun to watch stunt work and synchronized dance moves along with the nationally acclaimed Pride of Port Chester Marching Band putting on their show “España” from their current competition season.

As homecoming approaches, things look optimistic for PC if the energy will be anything like it was going up against Ramapo. Regardless of what happens, Sept. 30’s Friday night lights game was and will continue to be one to remember.