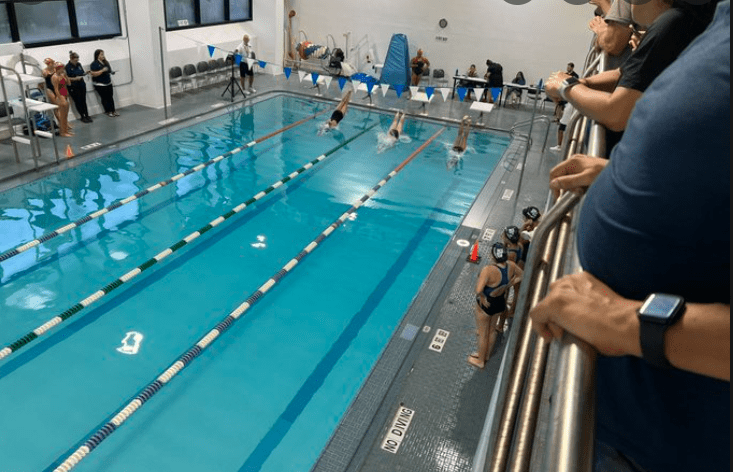 For most PCHS students, five in the morning means that they still have two more hours to sleep. But for the Port Chester High School Girls Varsity Swim Team, this means an early morning dip in the pool and up to one thousand yards of laps, the length equivalent to about ten football fields.

This season, which is soon coming to a close, has been their very best yet. With every passing practice and competition, the girls swim team seems to be getting faster and more intimidating to its competitors. “They’re one of the best teams we’ve worked with, probably ever,” shared both Mr. Raskin and Ms. Cahill, the swim team coaches. The team began their season triumphantly on their first meet, September 14, against Woodlands High School. PC beat Woodlands with a whopping 19 point difference, 57 to 38. On September 28, against their long-existing rival, Brewster High School, the PC girls managed to, once again, walk away victorious with a score of 50 to Brewster’s 43.

In past seasons, the swim team has consistently ranked on the lower end of their conference division. This year, they can be found proudly classed as third in their division. How did they do it? Coach Cahill credits the swimmers “passion” that has motivated them to put their all into the sport, even despite the “torturous” morning practices, as described by some of the swimmers.

Eventually, those tedious practices will be a fond memory for the graduating seniors. Senior Captains Sophia Ortiz-Heaney, Madeline Saunders, and Juliana Lopez share how bittersweet this year is for them, to see the swim team rapidly rising to the top and having to leave it just as fast.  “The swim team has become like a family, and it’s sad to see it go. We’ve had many losses but, lately, also many wins,” says Sophia Ortiz-Heaney, “both as a team and as individual swimmers.”

Coach Cahill and Coach Raskin both emphasize the importance of swimming to their team, not only to compete against others, but to compete against yourself and aim to increasingly lower your time. Perseverance, the coaches say, is one of the most important values students can take from swimming.

“Even though we’re not winning, we’re still getting better and that’s huge,” said Coach Cahill, “We don’t have to win, but we can achieve our goals, which is to be our best.”

“Don’t drown,” Coach Raskin jokes. Although a light-hearted jab, Raskin makes a good point. Swimming teaches students that there will be many obstacles in life that make you want to give up – to drown. Only with perseverance can one fight for one more breath, for one last kick, until one touches the finish line.

With this in mind, the PCHS Girls Varsity Swim Team hopes to continue pushing through their last few swim meets until the end of the season and establish the team for future Port Chester High School competitors.