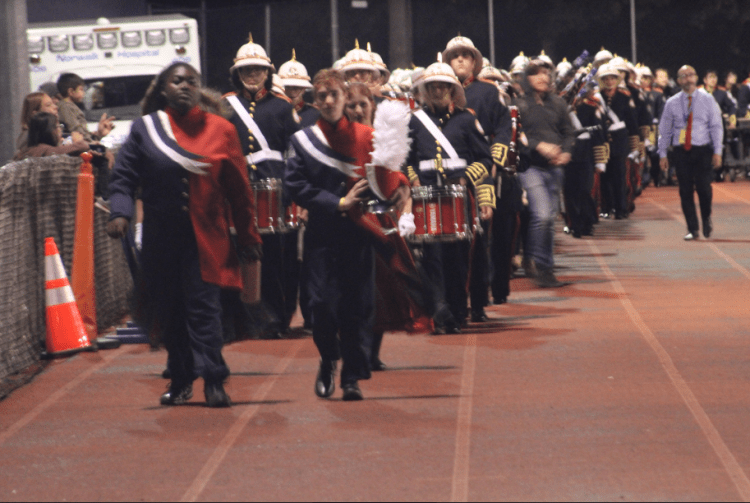 The Pride of Port Chester defeated  Frank Scott Burnell High School by two points. The band’s 2022 field show titled “España” encompasses the well known Spanish marching tunes: “España,” “Bolero,” and “Malagueña.” The show’s opener, “España” has been dedicated to the memory of Mr. Peter Horton, a member of the band’s staff who sadly passed away over the summer. Mr. Horton was the one that found the show’s opening tune, adding so much more to an already impressive show musically. His death is a tremendous loss to the USBands community.

Port Chester netted a very respectable first score of 72.2,  higher compared to previous years’ first competition. The band’s director, Mr. Mike Miceli has always designed the band’s shows to be hard. This is done so the band can maximize its growth throughout the season. While in the past this has caused PC to place lower, they always rose towards the top by Nationals.

Speaking about their first victory, Miceli said,“It feels pretty good, but I always try to brace the band for anything to happen. We have no control over our competitors, so we should be focused on our own performance. If we play well and still come in last, there’s no shame in that.”

The defending national champions will be seeing a significant increase in competition this season. Speaking to the differences between season openers from the past two years, band President Sophia Kamensky commented, “It made it way more nerve-wracking! We barely had competition last year, which was totally expected because everyone was coming back from Covid. This year though, in our first competition we had a competitor and we beat them. It put a little more pressure on our performance, but we still were able to have fun.”

The band’s victory was no easy task, Miceli commented, “Our competitor Bunnell HS put on a very good show. Most of our scores were very close. In some cases we beat them by a few or they beat us by a few. But it was the category of general effect that put us over them for the win.”

It only took a few points for PC to get first. Kamensky, who was out on the field along with the core student leadership said, “It felt great! I actually started tearing up after they announced that we won. It was really satisfying to see that our work actually paid off.”

Their hard work was rewarded by the crowd too, their show being a favorite with spectators. With many of the parents citing the immense improvement from band camp, which Kamensky also spoke about, and a full season ahead of them, The Pride of Port Chester will continue to march on, win or lose.